Transformers and other hybrid devices Class “2-in-1” are gradually beginning to strengthen their positions on the market and appear more and more interesting models among them. Today we will consider Ultrabook Acer Aspire R13, which is equipped with unusual hinge and can be used not only as a notebook but also as a tablet.

Acer Aspire R13 – it is quite thin ultrabook with a 13-inch display. Its main distinguishing feature is an unusual joint (which the manufacturer calls Ezel Aero Hinge). Due to it the laptop hinge can be used as a tablet.

The laptop is mostly made of dark gray color plastic, so it concedes premium Ultrabooks from other manufacturers by this parameter. However, in practice I have no claims to the housing: it’s quite hard and well assembled.

A set of connectors of the Acer Aspire R13 is standard: on the left side is HDMI-port, two USB 3.0 connectors and a headphone output. On the right side – a connector for the power supply, the power button, USB 2.0 port and a slot for memory cards SD / SDHC / SDXC. 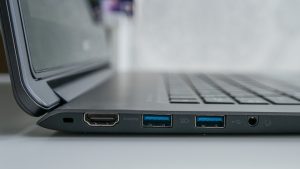 Aspire R13 has two LEDs: one shows that the laptop is switched, the other shows the state of the battery. And they arranged in such a way that they can be seen only from the front or from the bottom.

The laptop screen is protected by tempered glass Gorilla Glass 3, not only in the front but also from the back side.

I must say that the laptop seems quite large due to the large frames around the screen, and due to the hinges, which further added to it width. At the same time the keyboard takes far not the entire width of the work area.

The keyboard in the Aspire R13 has a very strange layout. The top row of function keys has been completely removed, and at the same time the number keys acts as functional. And not everything is alright with the mechanical part: the buttons have a very short stroke (almost like the new 12-inch MacBook) and slightly “rattle” when you print. But in general it’s possible to print on it.

The keyboard is equipped with a LED backlight, which has two levels of brightness – both are quite dim. Even if you turn on the backlight at full capacity, it will be well seen only in complete darkness.

Touchpad Acer R13 has quite large size, its aspect ratio (16: 9) corresponds to the proportions of the screen.

In the Acer Aspire R13 is installed 13-inch IPS-screen with a resolution 2560h1440 pixels. This screen has two disadvantages: first – its brightness, which is, according to our measurements, only 230 cd/m2, and, secondly – an additional sensor layer, which is used to work with the optional active stylus that significantly limits the viewing angles (both horizontal and vertical).

Acer Aspire R13 is a typical modern ultrabook in terms of architecture: it uses fifth generation Intel Core processor (Broadwell) and an integrated processor graphics. Integrated Graphics Intel HD Graphics 5500 has a base frequency of 300 MHz, and can accelerate to 950 MHz if it will be necessary.

Aspire R13 is equipped with SSD-drive LiteOn LT9 with capacity of 256 GB. This drive has an interface M.2 and shows good results in speed tests.

The notebook is equipped with a quite effective cooling system, thanks to which the keyboard and work surfaces are barely warm, even with the heavy load. Unfortunately, air intakes are from the bottom, so the cooling efficiency may deteriorate if the laptop is on your knees, or on the couch. 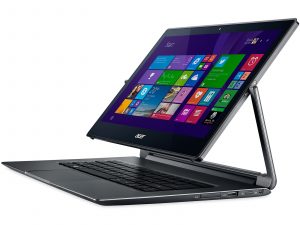