Most Popular Google Searches Of Nigerians In 2016

2016 has brought us a lot of events- both positive and not that much. These events led to the record-breaking number of Google searches – both predicted and absolutely unexpected!

We have analyzed the most popular Google searches made by Nigerians in 2016 so that you could check them out right now! 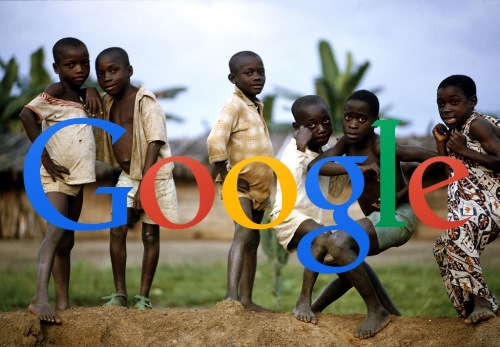 Let’s make Jiji the most popular Google search term in 2017!

As you can see on the screenshot, the most searched words on Google among Nigerians while they are searching for info about their favorite actors are: late veteran actress Bukky Ajayi, Henrietta Kosoko, Arakangudu, Dede One Day and Falz.

They are followed by such actors as Alan Rickman, Ani Iyoho, Juliet Ibrahim, Olumide Bakare and Halima Abubakar.

One of the most popular searches ever is “How to DJ a party”. Other searches are also quite interesting: how to stop auto-renewal on Glo (this feature sometimes can seem very unfriendly), how to know an original iPhone 5S (who would think that there are people who still cannot recognize a Chinese fake!), how to style twist braids (this is the real hit of the season!), how to munch on Samsung Galaxy S6 Edge – (making a screenshot on the device turned to be a real challenge for many users). 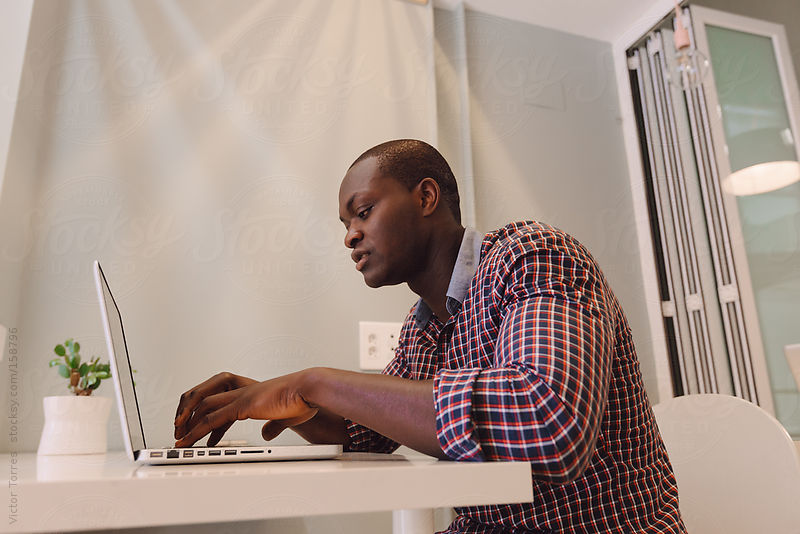 The following Google searches complete the 10 most popular searches in this category:

Vlog 063 – Saturday * August 6 , 2016 This VLOG is a little different. In this video we sit down for a Q&A session and I also share the story about why I have moved to a new appartment.

As for smartphones searches – this is a ready-made list of the most desired devices of 2016:

The most searched words on Google in 2016 include all of the upcoming premiers in the world of cinema. The first five places are taken by Suicide Squad, Captain America Civil War, Game of Thrones Season 6, Empire Season 3, Deadpool. 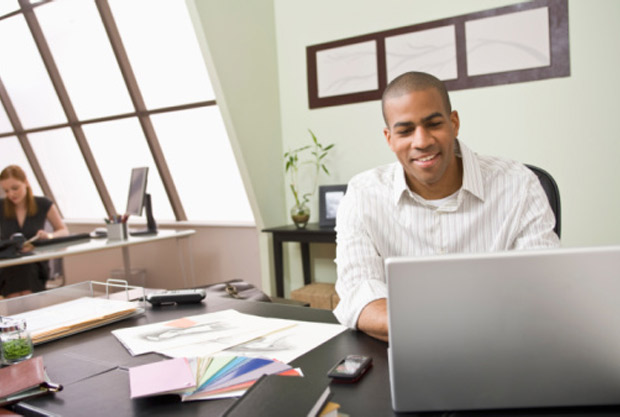 The other five include Batman vs. Superman, Warcraft. Gods of Egypt, London has fallen ? X Men Apocalypse. 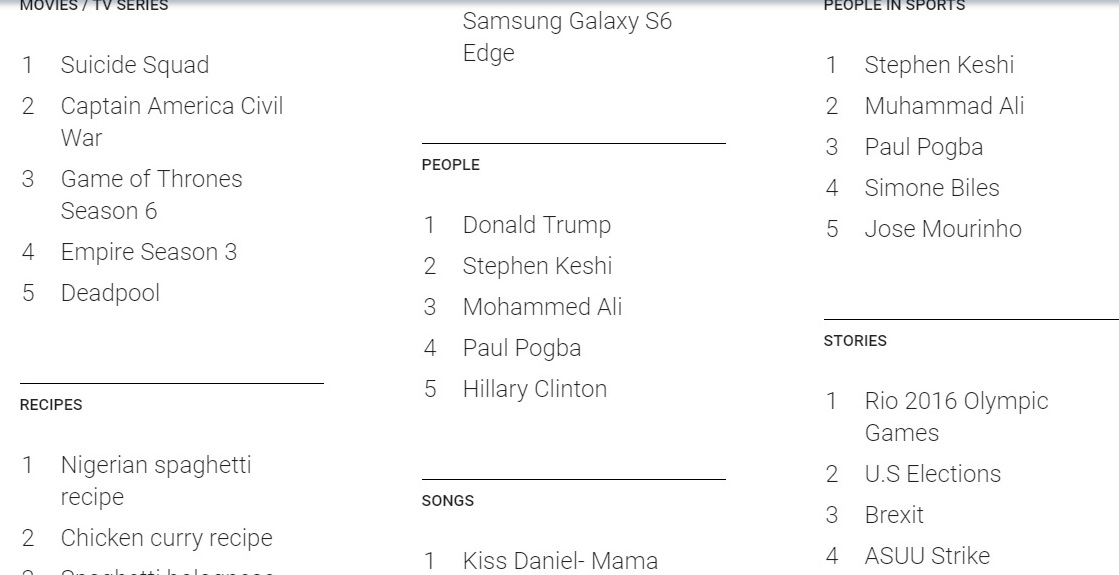 The tastiest category of Google searches demonstrates vividly what an average Nigerian prefers. Nigerian spaghetti recipe definitely has no rivals in popularity – this is a very wide-spread dish in Nigeria, and kids just love it! Among others there are chicken curry recipe, spaghetti Bolognese recipe, Ofada Stew recipe, and Nigerian cupcakes recipe. 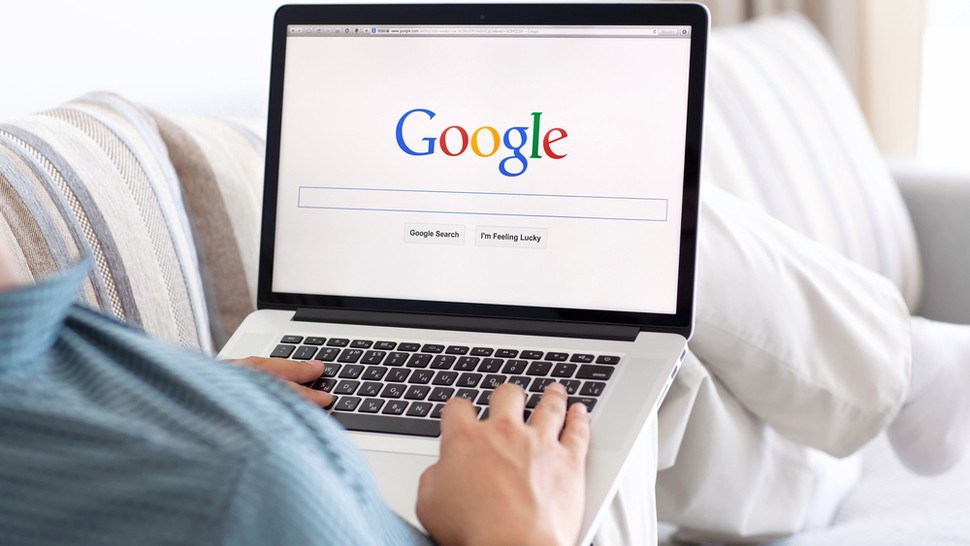 Tasty dishes are for your body. And music is something your soul needs. The most favorite pieces of Nigerian music lovers are the following: 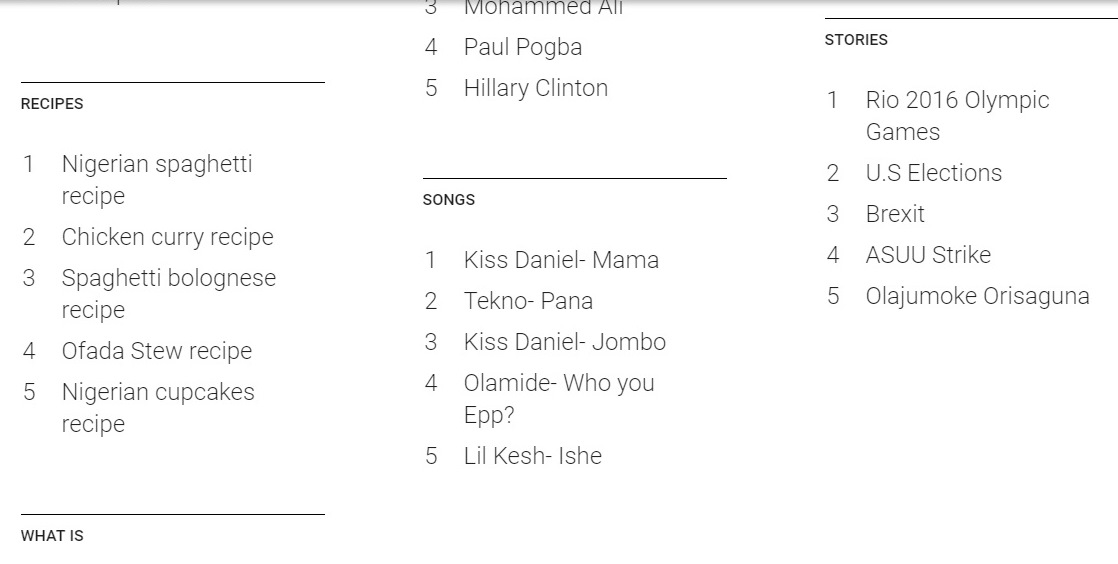 G-Worldwide Entertainment presents the official video to Kiss Daniel’s latest single “Mama”. Mama is one of the singles off his album. Produced by Young John and directed by Aje Films. On 1st of May, 2016, Kiss Daniel will release his much-anticipated first studio album NEW ERA followed by a concert on the 15th of May at Eko Hotel & Suites.

These are various important world events that are discussed most often. Both political events such as U.S Elections, Brexit, Edo Elections, ASUU Strike and sports events like Rio 2016 Olympic Games generate approximately the same number of searches.

The searches for any interesting information about Olajumoke Orisaguna, Holi Festival of colors, sex scandal of former Miss Anambra fall under the same category as well as bewailing the death of Fidel Castro. And, of course, can you imagine this list without the most searched words on Google about Black Friday?!

This category shelters various Google searches from the most curious Nigerians. 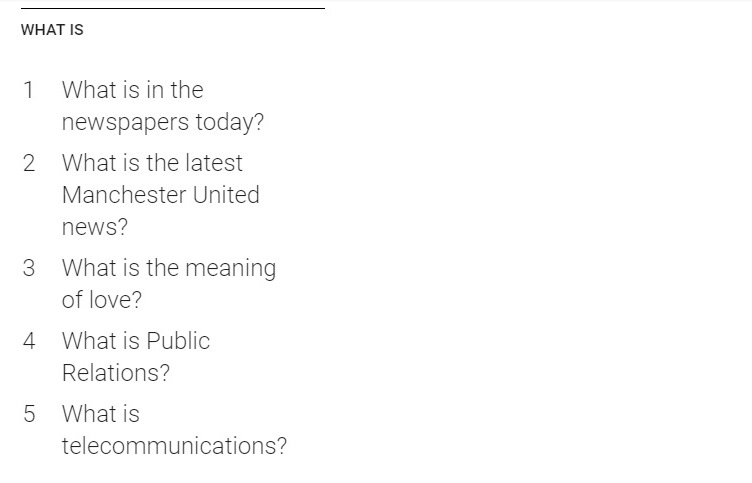 The popularity of Jiji grows every day: the greatest marketplace in Nigeria proposes most profitable deals, easy & friendly website navigation and highest level of security.

Why should you use Jiji? Just because you can buy & sell almost EVERYTHING here!

JiJi.ng is an Nigeria online classified site which serves as a platform to connect buyers and sellers who wish to buy, sell, exchange or trade used goods and services, by posting a Free Ad on the website.