Wedding dresses of celebrities have already become part of world history. When royal or Hollywood celebrities get married, their wedding dress becomes on the agenda along with political news.

For example, David and Elizabeth Emanuel had to create several wedding dresses so that the paparazzi could not find out in advance what the image of Princess Diana would be. Grace Kelly’s dress is an inspiration for Miranda Kerr even 60 years later, and the whole fashion industry was waiting for Kate Moss in a dress made by John Galliano.

We have collected 14 best wedding star dressed of all times: 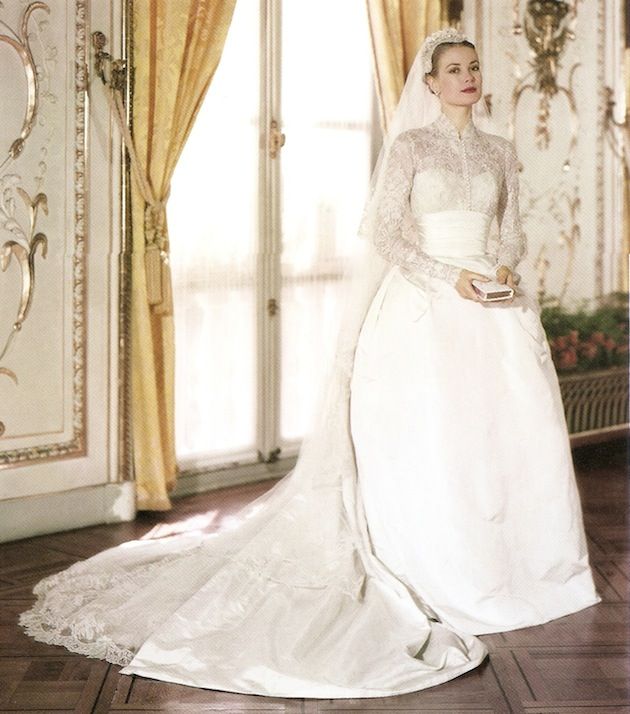 A real royal wedding dress was chosen by the Hollywood star Grace Kelly, who married Rainier III, Prince of Monaco in 1956. Grace, who was to rule the principality together with her husband, chose a strict dress, and the famous Valenciennes lace, woven more than a century ago, was used for it.

Perhaps, the wedding of Angelina Jolie and Brad Pitt was the most long-awaited wedding of 2014. Parents of six common children gave the main role in the organization of the wedding to their children. In creating the image of the bride, they, of course, also took a part – the silk dress made by Versace was decorated with children’s drawings.

The most scandalous supermodel Kate Moss married a rock musician (her spouse was Jamie Hins, a guitar player of The Kills) and, of course, not in a snow-white dress. John Galliano, an old friend of Moss, created her wedding dress in a boho style.

The main royal wedding of the 2000s is the magnificent ceremony of the wedding of Prince William and Kate Middleton, who was given the title of Duchess of Cambridge after the ceremony. Of course, Kate would not have been allowed to get married in a democratic dress, so her outfit was appropriate – a white dress, beautifully trimmed with lace, a stunning train and veil with a tiara.

Gwen married a rock musician Gavin Rossdale in 2002. The star, known for her experiments with style, reasonably did not want to be a classic brid”. As a result, Gwen’s dress turned gradually from white into purple. It is interesting that this original dress was created by John Galliano.

Sarah Jessica Parker herself married Matthew Broderick in a casual black dress (which she still regrets), but you, of course, remember the enchanting wedding dress of Carrie Bradshaw from Sex and the City. Unfortunately, even that dress did not help Carrie get married to Mr. Big, but it certainly made a splash!

Salma Hayek and her husband François-Henri Pinault broke up after the birth of their daughter, but then reunited and decided to get married. Salma chose a classic wedding dress with a lush skirt and sparkling top, and the ceremony itself took place in a Venetian castle of the 18th century and got together a good half of Hollywood under the roof.

Hilary Duff and her husband, a hockey player Mike Comrie, live together not too long, but their wedding was one of the most beautiful marriages of the 2000s. Hilary looked luxurious in an ivory dress that emphasized her body. The image of the actress was perfectly emphasized by a high hairstyle.

Ann got married to her long-cherished lover Adam Shulman in 2012, and decided her wedding is worth sewing the most beautiful and feminine dress. The result of the work of Valentino’s House was a weightless dress, looking like a cloud. The hem was painted in a faintly pastel pink color.

Natalie and her beloved Benjamin Millepied decided to arrange a very family wedding, to which only friends and relatives were invited. The actress chose a quite modest, but gentle dress, just below the knees and with a lush skirt. Portman decorated her hair with a flower wreath.

The singer married actor Josh Duhamel in 2009 and succumbed to the wedding fashion of those years. Fergie abandoned the lush version, preferring a bodycon dress, with a hem that widened below. A little carelessly styling hair only added more charm to the bride.

Megan Fox, famous for her numerous plastics and criticism of her colleagues, married Brian Austin Green in a very chamber atmosphere. Their wedding took place on the ocean shore, Brian’s son from his first marriage was the only guest, and Megan chose a minimalistic white dress without decor, which was supplemented with the same simple veil.

Bianca Jagger was the first legal wife of The Rolling Stones singer Mik Jagger at the beginning of the bohemian 70s, at the height of rock and roll, so no one expected the bride to have a chaste white long dress. However, Bianca went down in history, generally abandoning the traditional outfit and wearing a long white skirt, a white tuxedo with a deep cut on her naked body and a wide-brimmed white hat.

The future first lady of the United States got married to Senator John F. Kennedy in 1953. At that time, no one dared to experiment with the wedding dress, so Jacqueline’s dress was made in a classic style – lush, white, with slightly open shoulders and a small V-neck.