The AFL has named its 22-man All-Australian squad, and as usual, the team announcement came with plenty of uproar.

Fans ranged from disliking the format Fox Footy went with before the real vitriol was reserved for the players selected.

The news came with a new order of doing the entire midfield first, followed by the half forward and back lines, then moving to the final forwards and defenders before finishing with the bench.

Straight off the bat, the first six selections were hard to argue with, Max Gawn landed the highly anticipated ruck spot.

Then it was Patrick Cripps, Tom Mitchell, Dustin Martin, Andrew Gaff and Steele Sidebottom rounding out the midfield group.

Things took a turn when the bench announcements were made, and Richmond’s Shane Edwards was named.

On paper Edwards hasn’t had a season of similar ilk to other players within the 40-man squad, but his role in the Richmond side cannot be understated.

Of course, it didn’t stop people from questioning the selection, or others just out and out slamming the decision altogether.

Is it just me or is Shane Edwards getting All Australian selection ahead of players like Jack Macrae, Devon Smith and Elliot Yeo a bit perplexing?

Having an absolute laugh these AA selectors…

Good player, but how is Shane Edwards in the team ahead of some of the other candidates? #AllAustralian

Edwards’ selection, however, was just the tip of the iceberg with fans losing their mind over the captaincy announcement.

West Coast Eagles skipper Shannon Hurn had been widely tipped as the front-runner to earn the nod, but it wasn’t to be.

Instead, the captaincy was handed to Sydney’s livewire forward Lance Franklin, with Geelong’s Patrick Dangerfield named as the vice-captain.

Franklin’s selection into the All-Australian team made it number eight for him, joining a select group of the game’s legends in Gary Ablett Snr, Gary Ablett Jnr, Robert Harvey and Mark Ricciouto.

His selection as captain of the side was perfectly summed up by his reaction which was sheer bemusement over the announcement. 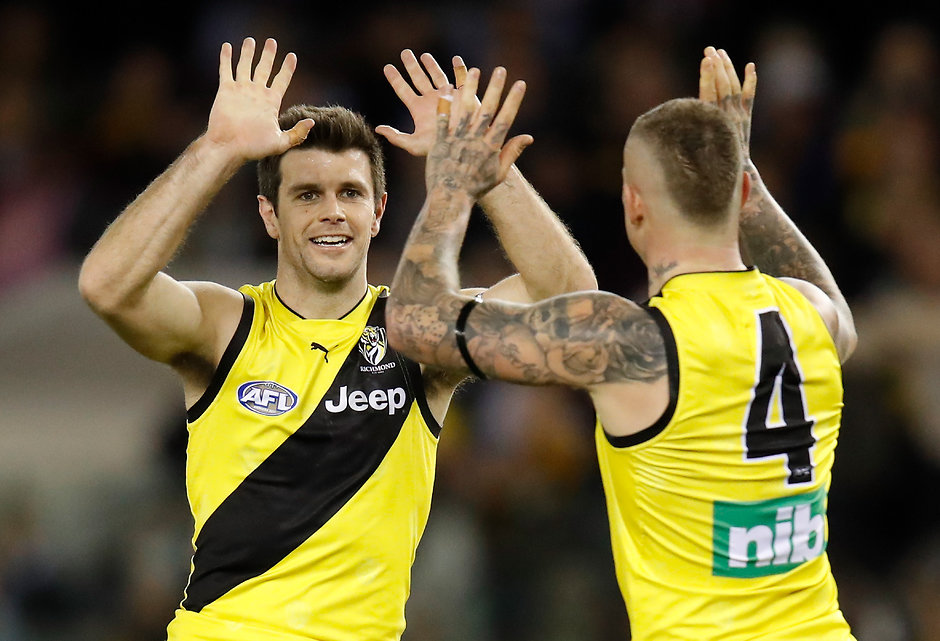 Gerard Whateley wasn’t a fan of the call believing the AA captain should be awarded to the games best leader. Hurn was the only captain to make the 22-man squad.

“It changes the nature of what the captain of the All-Australian team has been,” Whateley said on AFL 360.

“It has usually been who is the best captain of the competition; I think this is a ceremonial moment.”

His co-host and the Herald Sun’s chief football writer Mark Robinson backed up his stance.

“Shannon Hurn was named on a halfback flank. I’ve got no issue with Buddy being named captain, but I think the All-Australian team for that year should recognize the best captain for that year.

“Shannon Hurn is a first-time All-Australian, he’s had a career-best year, his team is second on the ladder, they’ve had a heap of injuries, I think West Coast have done a terrific job. I think Shannon Hurn has done enough this year to earn the 2018 All-Australian captaincy.

“In the last two years, without announcing it to anyone, the All-Australian selectors have revealed that we’re going to have a legacy captain every year.

“From that point, I hope Scott Pendlebury plays really, really well next year, if we’re going down that path. I think Scott Pendlebury deserves to be an All-Australian captain after everything he’s done. Is that wrong?”

I’m sorry, but Buddy Franklin as AA captain is absurd. Shannon Hurn has been absolutely shafted. All about the names this year. #AllAustralian #afl

Making Lance Franklin captain of the All Australian team justifies what a mockery this award ceremony has become…..the personnel on the judging panel need to change. #AllAustralian

Plenty of players were incredibly unlucky to miss out on earning a spot in the squad with Tom Hawkins, Ben Brown, Jack Macrae, Elliot Yeo and Devon Smith just a few of the big names.

Of course, there was players that didn’t even make the initial 40-man squad who wouldn’t have been out of place in the AA side, with AFL reporter Adam Curley not happy about Stephen Coniglio missing out.

There was a total of nine first-time selections in the 22-man squad announced on Wednesday night at Crown Casino in Melbourne.