A few days ago, the acclaimed Nigerian writer Akwaeke Emezi surprised her followers with a new announcement. To their surprise, the news did not concern Akwaeke’s latest literary works. The author shared a topless photo of herself, revealing the double mastectomy she had earlier. Find out more right now!

Shop thousands of goods with confidence on Jiji

1. What is a mastectomy?

A mastectomy is a surgery where a woman’s breast is removed completely. This term was mostly known among the medical community and the patients until several years ago, when Angelina Jolie revealed she had a double mastectomy due to the high risk of breast cancer. However, existing or possible cases of breast cancer are not the only reason to have a mastectomy, as the world has recently learned from Akwaeke Emezi.

2. Who is Akwaeke Emezi?

Akwaeke Emezi was born in Umuahia, Nigeria in 1987. Akwaeke is an Igbo/Tamil writer who published her first novel only a couple of years ago and instantly received lots of accolades for her writing. Emezi’s first autobiographical novel, Freshwater, came out in 2018 and got even more attention, having been translated into 10 languages and currently being developed into TV series.

Freshwater depicts a college student dealing with multiple identities, and that is why the novel is considered to be so close to Akwaeke’s own experience. In several online essays, Akwaeke Emezi revealed that she does not consider herself to be a woman and has already started a transition to become a non-binary individual.

746 Likes, 12 Comments – akwaeke emezi (@azemezi) on Instagram: “counting down to when i land in new york next week for the national book awards-my goal is to look…”

3. Why did Akwaeke Emezi remove her breasts?

In her journey to her true self, Akwaeke Emezi has already undergone several surgeries, some of them have been detailed in her posts for various online media. Earlier in 2018, the writer removed her breasts, and several days ago, on the six months anniversary of the surgery, Akwaeke shared a picture of her post-surgery scans with thousands of her followers. 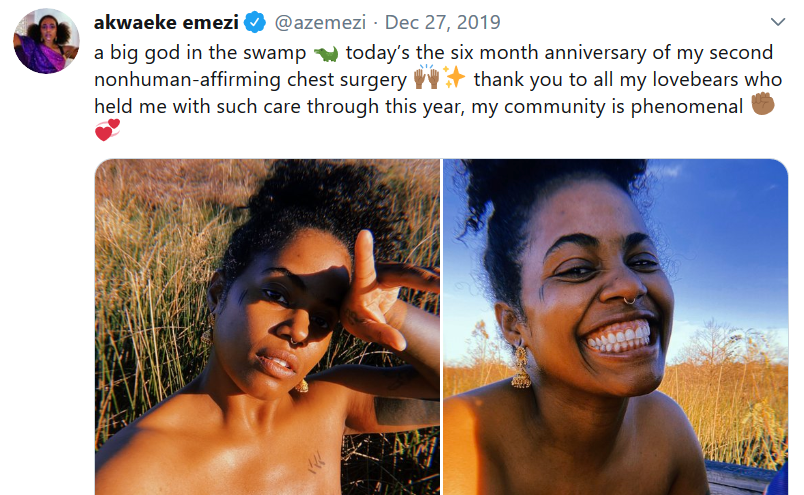 The response to her confession has been widely different across the fans. While there were a few critics of Akwaeke Emezi’s decision, most of the followers and online commenters praised the writer for her bravery and wished her a safe and fulfilling transition. It seems like Akwaeke has everything under control and we can’t wait to see what she has in store for her readers.