US President, Donald Trump, has started his governance by signing quite aggressive executive orders to ban travel entrance of the citizens of seven mostly Muslim countries. The executive order has resulted in chaos in many oversees and some US airports, and led to international protests, complaints from US businesses and drew more than a dozen legal challenges. All of this has led Trump to reconsider his decision and to issue a new executive order that will cancel some points of the previous one.

“The new order is going to be very much tailored to what I consider to be a very bad decision,” Trump said, adding: “We had a bad court.” Trump gave no details about the replacement order. Legal experts said a new directive would have a better chance of withstanding courtroom scrutiny if it covered some non-Muslim countries and exempted non-citizen immigrants living in the US legally. 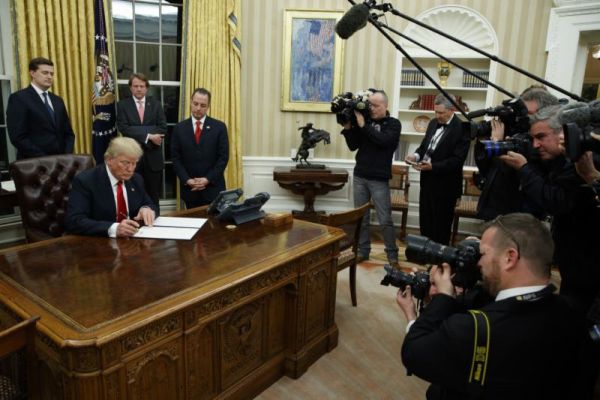 Nevertheless, Trump continued his explanations about the necessity of the travel ban for citizens of such countries as  Iran, Iraq, Libya, Somalia, Sudan, Syria and Yemen. They were banned from entering the country for 90 days. Refugees were banned for 120 days, except those from Syria, who were banned indefinitely.

Trump said on Thursday that the widely criticized rollout had been “very smooth” and once again blamed the court for “a bad decision.”The Justice Department court filing on Thursday said Trump’s order would be “substantially revised” but provided no more details than the president did at his press conference.